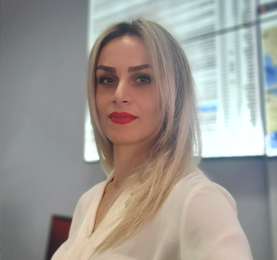 Irena Dushi (Ferra) is graduated in Physics (2002-2007) at the Faculty of Natural Sciences, University of Tirana. She received a Master of  Science degree (MSc), in 2007. She has been involved in different academic and teaching stages of her career as High School teacher of Physics and lecturer of Physics at “Aleksander Xhuvani” and “Aleksander Moisi” Universities during the period 2014-2017. Mrs. Dushi has been employed as specialist in the Strategic Planning and Energy Balance sector at the Department of Renewable Energy under the  National Agency of Natural Resources (NANR) during 2010-2012, as well as specialist on Physics in the Department of Data Collection and  Data identification, part of the Directorate of Nuclear Energy at NANR, 2009-2010. She has demonstrated also good organizing and management skills in private sector self-engagement.

Mrs. Dushi  joined IGJEO in September 2017. Her actual position is Monitoring Specialist (Analysts) in the National Earthquake Monitoring Center at the Department of Seismology (IGEO).