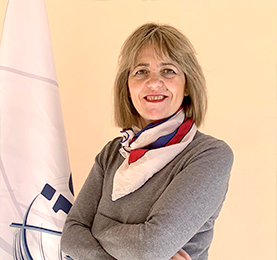 Dr. Hasimi studied industrial chemistry at the Faculty of Natural Sciences (1991-1996), University of Tirana. During the years 2003-2006, she completed the postgraduate studies Master of Science (120 credits) on "Polymer Science and their Applications", at the Faculty of Natural Sciences, Postgraduate Studies Committee, National and Kapodristian University of Athens, Greece. At the same university, she completed her doctoral studies during the years 2006-2010.

Dr. Hasimi during the years 2003-2008, has also worked as a chemist and scientific researcher at the laboratory "Phenomena e transport of matter", Institute of Physical Chemistry, National Center for Scientific Research "DEMOKRITOS". Agia Paraskevi Attikis Greece.

Areas of interest of Dr. Hasimi are focused on scientific research and teaching in the fields of analytical environmental chemistry, meteorology and climate.

Dr. Hasimi conducts scientific environmental and climate monitoring and studies. It also continues in parallel the expertise in the field of nanomaterial sciences. She is part of the research-scientific unit of NanoAlb created at the Academy of Sciences of Albania.

Dr. Hasimi is also a member of the Crystallographers Association of Albania (AAC).