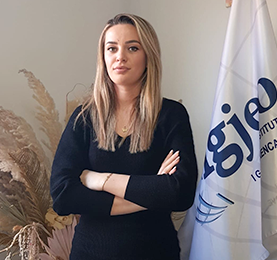 Eng. Gjoni studied environmental engineering at the Faculty of Civil Engineering (2010-2015), Polytechnic University of Tirana. During the years 2016-2018, she completed a second master's degree in "Urban Environmental Management", at the Faculty of Planning, Environment and Urban Management, Polis University. Currently she in the second year of Cycle XXXVII for her doctoral studies in the International Doctorate Program in Architecture and Urban Planning (IDAUP), in the field of meteorology and urban planning.

From 2016 onwards, she holds the position of Environmental Engineer at the "NATIONAL CENTER FOR FORECASTING AND MONITORING OF NATURAL HAZARDS", Department of Meteorology.

From 2020 onwards, she has the additional function as Official Press Representative of the Institute of Geosciences in all medias television, radio, print and internet.

The areas of interest for Mrs. Gjoni are focused on scientific research and giving lectures in the field of meteorology, environment, climate change and urban planning.

During these years as a member of the meteorology department, she conducted a series of trainings from WMO, EUMETSAT, ect.